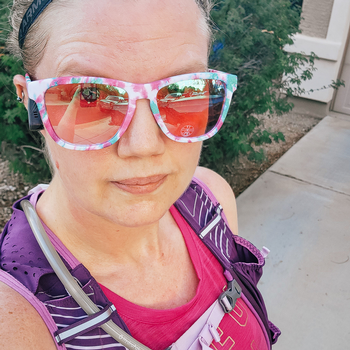 I had always wanted to run the UWL Turkey Trot (my alma mater) as the ads made it look like so much fun. I never got around to it while living there. I was too anxious to attempt to run outside. I didn’t think of myself as a runner. I ran for exercise.

Then sometime in 2011, I started running outside since I didn’t want to pay for a gym membership. I started my own version of couch to 5k and decided it was time I tried a race. I signed up for the 2012 UWL Turkey Trot and my dad, who had been running as well, did too.

After that, I went crazy and ran a ton of races and started doing half marathons with the eventual goal of a marathon.
Since then I’ve been diagnosed with celiac disease and went through a depressive state (I gained about 10 pounds in about the first-month going gluten-free). I stopped running for a bit and gained more weight, which added to my depressive state.

Finally, I had enough.
I started running again in 2016 and decided to really try to train for a marathon in January 2017. I got a horrible sinus infection about 2 weeks before the marathon and was getting dizzy while running. I dropped out of the marathon. I tried running off and on for a few months and still got dizzy so I stopped.

I finally got tired of not running, again, and went to the doctors (general and allergist/asthma specialist) over the past year. I was diagnosed with vocal chord dysfunction and started on medication and haven’t had an issue since.

I am currently working to break a 30 minute 5k in January and after that I am going to start training to conquer my next big goal, an ultramarathon! I look forward to training with Picky Bars for my next adventure!