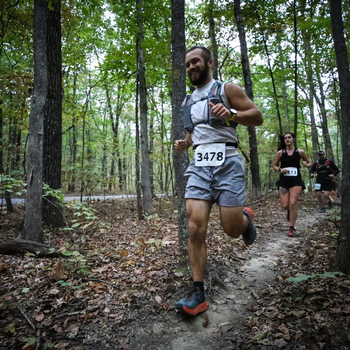 I am an ultra runner in eastern Tennessee, in a small mountain town outside of Chattanooga named Signal Mountain. I've completed both the Chattanooga 100 miler and the Yeti 100 mile endurance run (sub 24 hours). I've also finished one 50 miler and multiple 50ks. While my accomplishments are great and a driving force for me, my real story is about 8 years ago when I severely tore my meniscus practicing Brazilian jiu-jitsu. I then got knee scope surgery and after the surgery, the doctor told me that my knee looked like a bomb blew up in it. He said that I would likely not run much, definitely not without pain. Following this, I was devastated because I was just getting into the triathlon scene - this was even before I found ultras. So, devastated, I prayed. I prayed to be healed. Not for running's sake, but so that I can be an active father to my kid. I wanted to run around and be the dad that plays outside, not a dad with constant knee pain. I then went back in for a follow-up MRI. The doctor came in after my scan and was bewildered. He asked me if it was my right knee, which I confirmed. He then proceeded to tell me that he doesn't know how but my meniscus looked like it was never torn in the first place. It was healed. Since then I've run over ~6,000 miles and to this day I'm thankful to God for the opportunity to be active with my kids, run anywhere I want, and tell others my story.