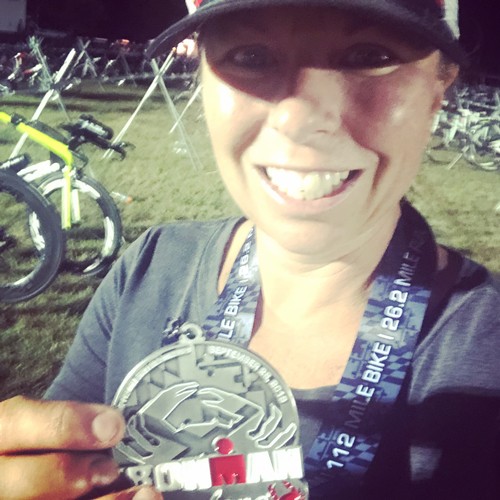 Jellyfish! Pretty good race despite the jellies, wind, and heat challenges! This was my fastest Ironman race since 2015 and that was a current assist swim! I am happy!


I arrived in Cambridge around 11am on Thursday and had a super chill few days pre-race. I met new friends, ran around town in my undies, had a couple drinks, tried to swim, rode the run course, and hung out with my Baucco Squad teammates. Super low stress, minus the jellyfish stings!


Jellyfish. That is all.


No, but really, the swim was tough. I think I got about 8-10 stings, pretty much any exposed skin got stung multiple times - hands, feet, face. I would guess that zero people exited the water sting-free. It was very weird palming a jellyfish mid-stroke every so often! It was also a very crowded and physical swim. I had to stop twice to put my goggles back on when I took an elbow to the face so that temporarily distracted me from the face stings I was receiving. I was a little disappointed in my time but considering everything happening out there I am ok with it. It was my fastest non-current assisted ironman swim, so I guess that's good.


What was I doing in there for almost 8 (!!!!) minutes!!!! Slowest T1 ever. I blame my stop at the vinegar sprayers. It was also kinda a long run in and out.


Pretty uneventful, lack-luster bike ride. Despite my decent time, I did not feel this bike was as strong as it could have been. The day before the race the bike course was changed due to flooding on the course (which I guess happens a lot) but since I didn't know the course it didn't make a difference to me. I found the time to go by really fast out there. I stared at my Garmin watching my speed and not my heart rate because for some reason It was not registering and when it did it would say something like 39 or 42, which was certainly not right! It was frustrating to have my speed fluctuate so much with the winds as we turned corners and rode in different directions, one minute I was cruising along easily at 21mph and the next I was struggling to go 17! In the end, II was happy to go sub 6 hours and come away with my 2nd best Ironman bike split, although I was secretly wanting to ride 5:40.


Really!!! Seriously, what was I doing in there?


Now if someone would have told me before the race I was going to take over 6 hours for this marathon I would have been really disappointed. However, I am not!!! I had a GREAT run! I know that for some of you probably can't imagine that running a 14 min mile is actually running ...but I can assure you that I did indeed run this entire race (minus the walks through aid stations about every mile). I was very happy that I kept running a steady pace the entire race, the only thing that changed was how much time I took at the aid stations. At about mile 15 I started having flashbacks to Chattanooga last year when I got dizzy and kinda scared I was gonna keel over out on course and knew I needed to eat something other than Shot Blocks and maple syrup. I spent the next 3 aid stations eating potato chips and bananas while taking a little extra time walking to shove it all down. It seemed to work, after 2 miles I felt much better! The last 4 miles were tough but luckily there was a lot of crowd support and I would see teammates and friends at different points so I always looked forward to that! As always it was a great feeling to be done! I worked hard these last 8 weeks and I am super happy to have a little break now!!


Every ironman has its challenges besides the physical...sometimes it's wind, or rain, or heat, or cold. Maybe its an illness or an injury. This time it was the jellies ?? But I survived, however, I did swear off ironman forever at about mile 16. We shall see....


As always huge thanks to my Coach Stephanie Oleksuk Liles at AJ Baucco Coaching! You are the best, I am so lucky to have you on my team ??!