October race: Mt. Tabor Tar n Trail 5k: Saving the hardest til one of the last

I set a goal at the beginning of the year to run at least one race a month, mostly 5ks with a 10k and sprint tri thrown in for variety and to make me bike and swim. Here is October's race.

If you are one of those uber athletes who does full, or even half Ironman distance tris, runs ultra trails to alleviate weekend boredom, ride trails up the side of mountains, stop reading now. You will be unimpressed with my heroic effort in this 5k. :)


My daughter Kasey joined me in this race. The only think better than running with your kids, is some day running with my grandkids, they are 1 and 3 at the moment. The 3 year old already races me to the end of the block. She's too cute to beat now, but in the coming years she will have to earn it. Kasey is the last of my 2 daughters to have yet to defeat me in a race. 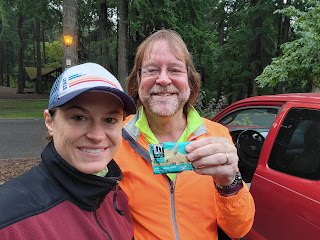 Mt. Tabor Park is a large, beautiful urban park in Portland, OR. It is called Mt. Tabor for a reason, it's a f**king mountain in the middle of the city!  And those hills are not the nice rolling ones, or the long gradual ones. No, these are long AND steep! Hey, long is relative, we're talking 5k not ultra 100,000 miles. I told you uber folks to stop reading. ;)


I had a proud dad moment and humble dad moment during this race...at the same time. About a half mile into the nice gradual downhill at the start while I was mentally thanking my knees to not protesting, Kasey says, "am I holding you back or are  you holding me back?" Such a polite kid! I told her unfortunately the latter. At that point she surged ahead. Proud she went out, humbled to be left in her dust.


Then came the change. Uphills! In my prideful/humble state of enjoying my knees not protesting this downhill, I forgot one important fact. After the downhill comes the UPHILL! And as Murphy would have told me had he been there to ask, for every downhill the uphill is steeper and longer. Oh, and did I mention stairs? There was a set of stairs to climb! Like 75 or 750 straight up! I lost count because my ability to do simple math eludes me when my lungs are busting and my quads are screaming! But I digress.


As proud as I was of Kasey, she does has an unfair training advantage. She trains running the hills near their home in NE Portland while pushing a stroller with 60 lbs of toddler and infant. I train near my home in Salem, OR where the steepest hills are the curb cuts for wheelchairs. My repeat curb cut workouts were no match.


About two miles into the race, we were running around one of the reservoirs in the park and I see Kasey on the other side about a quarter mile ahead of me. I yell her name, she waves and I yell again, "I'm catching you on the next downhill!" Goals are important, even in mid-race.


As I crossed the finish line she greeted me with a high five and "there weren't anymore downhills." I raised observant children.


It was a hard, fun race made even more fun by having my daughter with me. 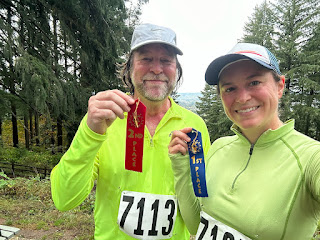 The photo not only depicts the order of finish in the family competition but where we placed in our respective age groups. Congratulations Kasey, you earned it. Best running partner.